A 19th-century term for row housing, terrace housing refers to identical or mirror-image houses sharing side walls. Such terraces were a traditional British form of domestic architecture generally only found in the larger urban areas of Ontario. London has several examples. 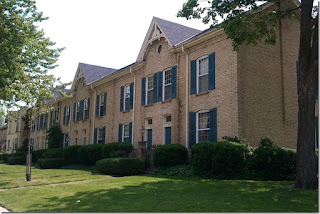 One of the loveliest, 339-349 Princess Avenue (left), known as Princess Terrace, was built in about 1886 in the High Victorian Style. The roof line is broken by three gables with decorative wooden details and round windows. There used to be porches but they were removed during renovations. Still attractive though. 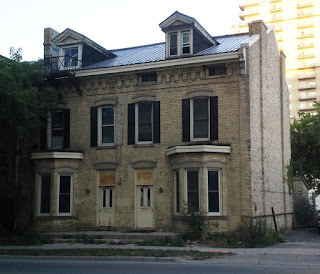 A sad example is Camden Terrace at 479-489 Talbot Street (right), built 1876-77. The buildings, owned by Rygar Properties, have suffered from neglect for years. Rygar intends to demolish the terrace and build three residential towers on this site, incorporating a rebuilt facade of the terrace in the lobby. This, of course, with London city council's blessing, since the majority of councilors voted in favour of demolition on September 13. Take a look while you still can. 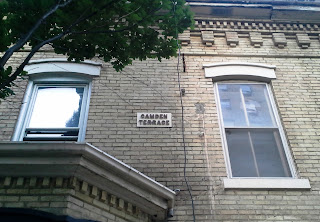 The Camden Terrace situation raises the issue of infill development in London's core. How much do we want, where do we want it, and what should it look like? How many heritage buildings will be lost to highrises?


Update: Demolition of CT began in November 2016 and is now complete. RIP.

August 2018: And Rygar has not yet started building on this site.

Posted by Jennifer Grainger at 9:44 PM